Food chain - A flow of life within living species

As we all know that all living beings need food to grow and stay alive, though the food requirement of one type of organism is differ from other. For example plants need air, water and sunlight for making their food and insects depend on plants for their food, where some other species eat insects etc. So there is a dependency of one organism to other for food that makes a chain for feeding. This dependency can be intermixed too forming a food web.
Nature maintains itself through maintaining a quantitative balance between living species via food chain. First of all Food chain and Food web concepts were introduced in a book published in year 1927 by Charles Elton.

What is Food Chain?

A Food chain is a series of organisms depending on next one to feed upon. This chain is generally shown by arrow links from prey to its predator. Basically a food chain starts from a plants that eat no other organisms in the chain and ends at a species that is not eaten by any other species. Examples: 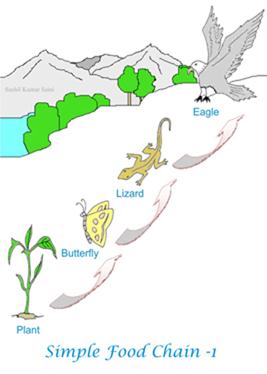 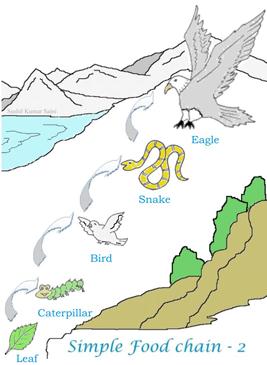 Simple Food chain -1 diagram shows a Food chain which starts from plant, then a butterfly sucks nectar from the flower of that plant and subsequently eaten up by lizard, and an eagle is the top level predator who hunts the lizard.

Producers in the Food Chain

Producers are the plants that utilize solar energy for photosynthesis and use air, soil for making their food. All food chains must start with a producer.

Consumers in the Food Chain

Consumers are organisms that eat other organisms. All organisms in a food chain, except the producers, are consumers.

Predator in the food chain

A Predator is any organism that hunts another organism, usually for food.

Prey in the food chain

In a food chain, prey is the organism that is eaten up by a bigger animal (example: In example diagram-1 butterfly is a prey that is eaten by lizards).

Some other examples of Food chain are:

Different food chains intertwine with one another and form a network of food chains called Food web.

A number of food chains are available all around in air, water, under and on the land. Another example diagram of a food chain can be seen in Simple Food web-2. 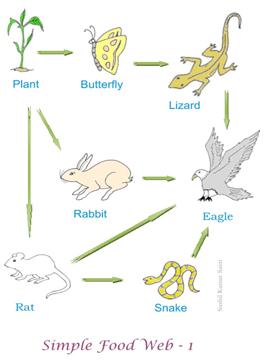 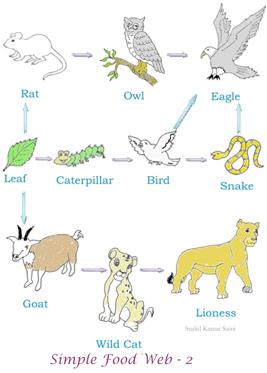 A Message for kids:

Food chain maintains a natural balance of species on our earth, unbalance to which can result to adverse affects on our life too. If any one species in between a food chain gets extinct, the entire food chain gets disturbed and can lead to extinction of its upper leveled species too.
The main reason for this disturbance can either be adverse climatic condition for a species or human interferences to nature. Different types of pollutions spread by human are responsible for extinction of many rare species in our biological system. So this is our responsibility to control such human activities, otherwise this will be disastrous for humans too.

We all must have to know that food chain is not only the part of our biological system but also a necessary component of our ecosystem.

Nature maintains this biological system by making a quantitative balance between all predator and preys. If we start moving from bottom leveled producers to top leveled predator in any food chain, we will find that number of predators start decreasing for each next level. For example number of plants at bottom level is very high, number of butterflies at its upper level less than plants, subsequently next leveled lizards are much lesser than butterflies and at top level eagles are comparatively very less in number than lizards.

The variation in number of species at each food chain level is because if number of predators on a level gets higher than its prey level, they will eat up all their prey and after finishing all preys they will also die without food and the survival of their next leveled species will be endangered too.

In this collection I have uploaded pictures of various eatables that children love to eat. Every child love chocolates, candies, burgers, pizzas and various eatables. So give your child these mouth watering picture printables and I am sure they will definitely enjoy coloring these pages.