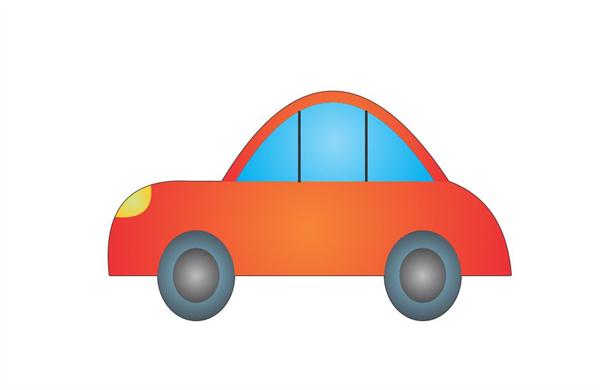 Follow the step given below to draw your own car

Step 3 Join the line at one end with a curve, as shown in figure.

Step 4 Repeat this step now at the other end of the lines, as shown in figure.

Step 5 Draw a curve above the line we made in step 2.

Step 6 Now, to make the tyres, draw a circle, bisecting the line, we made in step 1, as shown in figure.

Step 7 Draw another circle same as previous, at other end also, to make the other tyre.

Step 8 Remove the line inside the both circles.

Step 9 Draw small circles inside the circles we made in previous steps to complete the tyres of the car.

The outline of the car is ready now.

Step 10 Make a curve smaller than the curve we made in step 5.

Step 11 Now, make the windows of the car by drawing a line inside the curves, as shown in figure.

Step 12 Draw another line to make the other window.

Step 13 Now, draw a curve to make the lights of the car to finish off the drawing.

The car is ready. Color it using your favorite colors. Now you know how to draw a car.

Show it to your friends and have fun. Enjoy!

How to Draw a Hut or House

In this article I have given the ways how you can draw a very good looking hut or house in simple steps, I have given pictures of each step to help you in making this hut. All the points given are clear and will be helpful if you follow each step sincerely.

Learn how to make a snow man ( Ice man)

In this article I have given all the step by step procedure of making a snow man in a sheet of paper specially meant for the purpose of making children creative. All the points are easy to learn even a small kid can also learn of his own.

How to Draw an Ice-cream Cone

In this article you will get the idea how you can make a sweet ice cream with very small efforts on a sheet of a paper. All the steps are very clear to understand. Read the points carefully abd then try it yourself.

How to draw lotus : Tutorial designed for small kids

In this article I have written about the how a small kid can draw a very beautiful Lotus on his/her drawing book by just simple steps. All the steps in this tutorial is very easy to learn and understand.

Drawing is fun. This article has printable worksheet of how to draw a boat and create a scenery with it. Kid have great imagination skills. Let us help them draw and improvise their skills. This article also has an video demonstration which has the step by step instruction that you can show to your kids.