Human life exists on the Earth primarily because of the presence of oxygen in the atmosphere. Every living being on the Earth have respiratory system of various 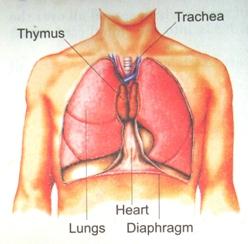 types. Some may have lungs ,some have gills and some may breathe through pores in the skin. Like all other creatures , man too needs to breathe. When we breathe , air is taken in through our nose and filled into and organ in our chest called Lung. The organ takes oxygen form the air and carbon dioxide is released out.

The lungs, throat, nasal and the bronchi constitute our respiratory system. The lungs are located inside a flexible rib cage and covered by the Pleura which is a thin membrane. Lungs are made up of air pipes and billions of tiny air sacs called Alveoli. These alveoli retain the oxygen brought to them by bronchioles and passes it on to the blood which is flowing through the capillaries - the blood vessels. The lungs are joined and held together with the help of a diaphragm. 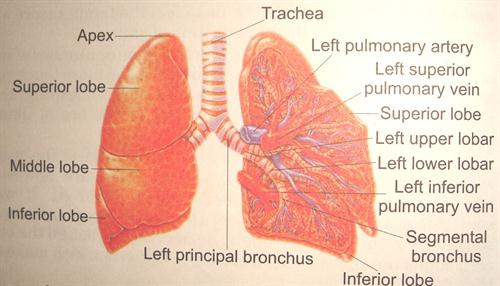 When the muscles between the ribs contract, they enlarge the lungs thus resulting in sucking in of air. When our chest muscles relax, the spongy lungs instantly return to their original size and air is imparted from the lungs.

The air that we breathe passes through the wind pipe called trachea and reaches the lungs. Oxygen in our body is used to convert the food we eat into energy. The respiratory system also helps us in speaking and making sounds. This is done with the help of two lathery flaps called the vocal cords situated in the voice box, called Larynx, at the bottom of our throat. Smoking and air pollution causes harm to the respiratory system subjecting it to various lung diseases including lung cancer.