Nature is full of amazing creatures. And each of them are so beautifully designed by the architect GOD!

So let's start with some history of the 'Nature'.

Do you know about the bird DODO? Well, the word Doudo is a Portuguese word the meaning of which is Stupid. Yes, you are correct, the Portuguese named the bird in the name DODO! Now you might be interested to know WHY? Aren't you?

So let's read the story behind it:

Mauritius is an island which is 720 square miles in area. If you know the Indian Ocean ( find in Maps ), there is place called Madagascar. The place Mauritius is lying 500 miles to the east of Madagascar. In the place Dodo lived. No humans lived there that time.

The bird Dodo was big, clumsy. It had short legs which are almost incapable of supporting the weight of its body ( i.e the fat rounds its body )! If you have seen Swan then you can understand that it's size was of a swan's. Yes! It had inadequate, stubby wings which were of no use for flying. 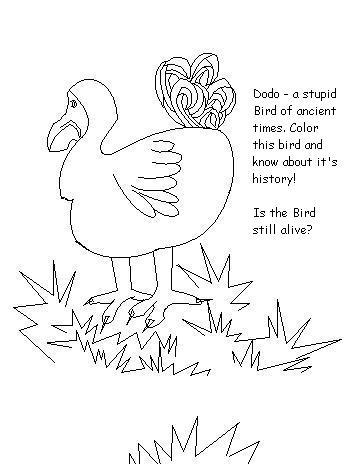 The bird lived there in Mauritius peacefully with its physical appearance until humans arrived there with their pets like Cats and Dogs etc. They say that Dodo was a stupid bird.

The bird became extinct within 180 years of its discovery by the Portuguese.

With the help of drawings and collected bones gathered in Mauritius an almost reconstruction of the bird Dodo has been made which can be seen at the Natural History Museum in London.

Mauritius is the only place in the world where the bird is known to have existed! Though, a similar kind of bird lived on neighboring island of Rodriguez. But, alas, this also has become extinct!

Over the intervening years many of the Dodo birds were brought to Europe totally alive! By 1680 the bird Dodo had succumbed.

Now a days a phrase "as dead as dodo" is used the meaning of which is "something is very dead indeed".

I've drawn the picture of the bird in quiet an easy step for you, kids, to practice! You are welcome to download the picture and print out as many copies you want to color and try to draw again on a blank paper or in your drawing exercise book! And don't forget to write things whatever you learn from the resource! :)

We'll learn more about other creatures on are/were on Earth! :)
Till then Take care. :)