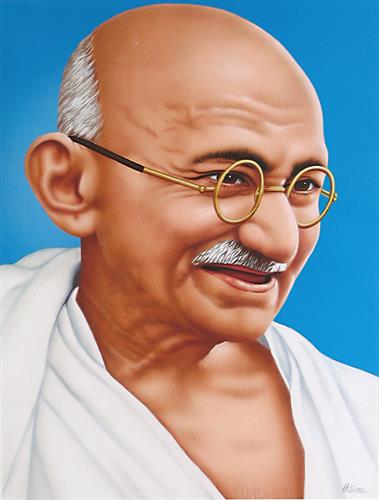 Mahatma Gandhi Popularly known as BAPU got the title of Father of Nation for his unmatched dedication towards the freedom of India and we all remember him as the great freedom fighter was born on 2nd October, 1869 at Porbandar in Gujarat state. Small children used to call him as Gandhi thatha. His full name was Mohandas Karamchand Gandhi. His father's name was Karamchand Gandhi and his mother's name was Putlibai. Rabindranath Tagore gave him the title Mahatma which means a great soul. At the age of 13 he got married to Kasturba. His marriage was arranged by his parents. In his early age itself he learned non-injury as well as tolerance. He is very truthful person and never says lies. He says everyone to be true and truth will surely win your every race.

After passing matriculation, he studied law in Bombay University and went to England for graduation. He became a barrister in 1891. In 1893, Gandhiji went to South Africa for a legal case. At that time, the African government was used to ill treat the Indians living there. Gandhiji was very much moved by the sufferings of Indians. He led a peaceful fight against the government to improve the living conditions of Indians. He was successful in achieving many rights to our people in South Africa.

He returned to India and joined the freedom struggle. He led a non-violent movement. Non-violent and satyagraha were the two great weapons to fight against the British rule. He led many non-violent movements like salt satyagraha, non-cooperation movement, swadeshi movement and quit india movement. He struggled a lot to get freedom for our country. Because of this struggle he was sent to prison for about six years during his total life. In his prison time, he wrote many letters to the Russian author, Leo Tolstoy. The British yielded to Gandhiji and granted us Independence on August 15th, 1947. Under his leadership India became free on August 15th, 1947.

Gandhiji was expired on 30th January, 1948 at the age of 78 years. He was killed by Nathuram Godse, when he was attending evening prayer at Birla Bhavan grounds, New Delhi. Gandhiji's last words was “Hey Ram". His last wish was to split his ashes all over the country and scatter in the rivers. In the same way it has been done. Some portion was scattered in Shrine lake at Los Angeles and the remaining at Raj Ghat, New Delhi.

During his lifetime he got five nobel prizes for peace. His birthday is celebrated as a Gandhi Jayanthi in all over the county. It is declared as a National holiday.

This is a great thread that every Indian is supposed to read as it will encourage them to be themselves and fight for the peace of the country. I am particularly impressed about this as this is good and really talked about an heroe that fought for the greatness and peace of the people of India and the people yet unborn.