Bangalore has always been at the forefront of education for several decades. Some of the earliest educational institutions such as Wesleyan Canarese School established in 1832, and the Bangalore High School established in 1858 by the Mysore Government paved way for the western system of education in the city. It was in the year 1909 that the renowned Indian Institute of Science was founded and since then Bangalore has been home to some of the prestigious universities and educational institutions that have made the city one of the major educational hubs in the country. 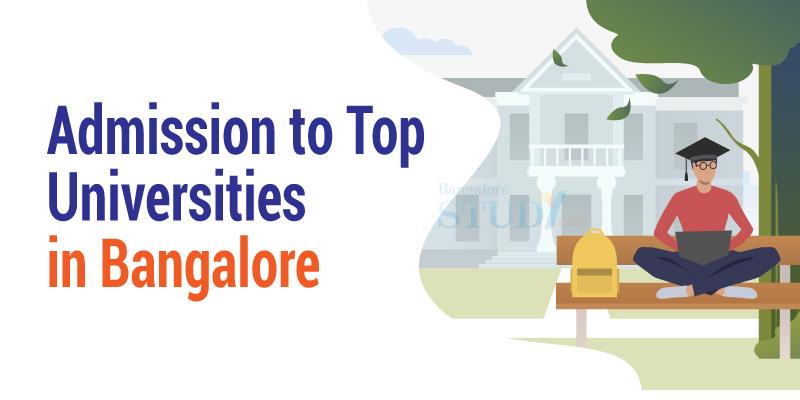 When it comes to higher education after the higher secondary, the city has carved itself a niche in the sector with several top educational institutions offering various courses in engineering, medicine, management, IT, allied health, humanities, and a wide range of other fields. As a result, admission to top universities in Bangalore for MBA, MCA, BBA, B. Tech, M.Sc, and Nursing Courses has become highly competitive and lakhs of students from all over the country flock the city during the admission season.

The admission process to these courses varies depending on the college and the university it is affiliated to. While some colleges are either autonomous or Deemed-to-be universities, others are affiliated to universities such as the Visweswaraiah Technical University, Rajiv Gandhi University of Health Sciences, Bangalore University, and others.

Admissions to top universities in Bangalore for various courses are based on the eligibility criteria and selection process as stipulated by the institutions, in case of autonomous and Deemed-to-be universities, or by the universities to which a college is affiliated.

For admissions to undergraduate courses, the eligibility criteria are usually in the form of a minimum cut-off set for marks scored in the 10+2 or equivalent exams along with compulsory subjects during 10+2 especially for engineering, science and IT courses. While admission to professional courses such as engineering and medical require a common entrance test such as COMED-K and NEET-UG, some institutions conduct their own entrance tests.

Once a candidate meets the minimum eligibility criteria and clears the entrance test, they might be eligible for admission or the selection process can include further steps such as an interview, group discussion, and other processes.

Most private colleges and universities also accept students to various professional courses in engineering, medicine, management, and other fields under management and NRI quota. Admissions under these quotas have a fairly relaxed selection process but command higher fees and other academic costs.

Most colleges in Bangalore that offer MCA accept PGCET conducted by the Karnataka Examination Authority as a valid entrance exam. However, if the educational institution is affiliated to a private university or is a part of a Deemed-to-be University, they might conduct their own entrance exam.

Admissions to BBA in top universities in Bangalore are based on the marks scored in 10+2 exams. Although there are few exceptions, most colleges do not have a stringent selection process beyond setting minimum cut-off marks.

All engineering colleges in Bangalore come under the purview of COMED-K and as such students need to take up the entrance exam eligibility for which is scoring 50% minimum in Physics, Chemistry, and Mathematics. Admissions to colleges then happen over a counselling session where students can choose a course and college based on their ranking.

For admissions to M.Sc in Nursing from nursing colleges in Bangalore, the Karnataka Examination Authority conducts PGET as a part of the selection process. Based on the rank obtained in the exam, students can choose the college and specialisation within the course.

Other Factors for Admissions to Top Universities in Bangalore
One of the important factors to consider while choosing a college or University for admissions to various courses include the cost of living as it can be significantly higher than some of the other Indian cities. However, most colleges do offer affordable hostel facilities that are located either within the campus or close to it. The climate of the city is one of the favourable factors and along with the reputation of the city of providing an excellent quality of education, it makes Bangalore a top destination for pursuing higher education in India.